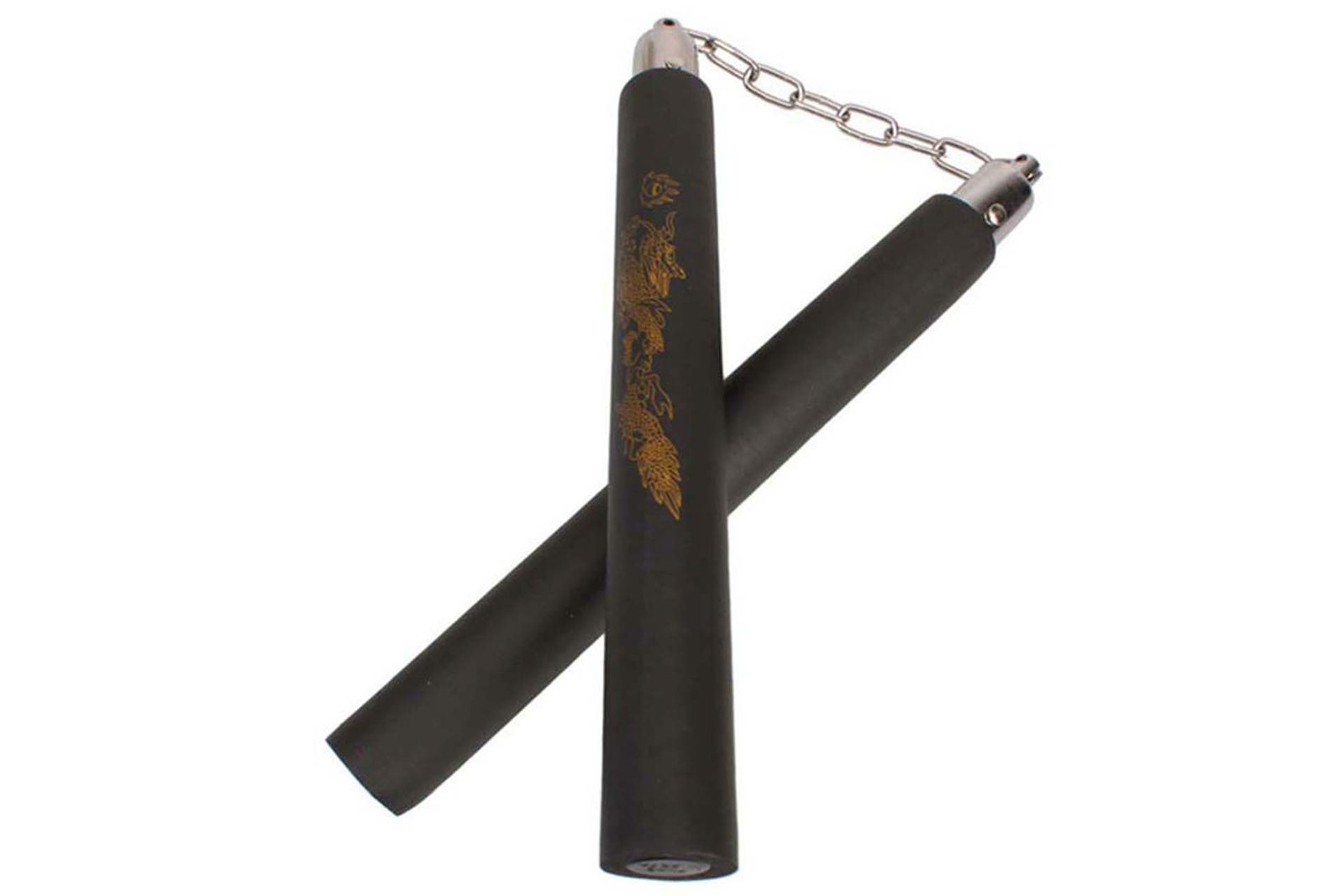 Nunchaku technique for self-defense, the defender squares off against the knife-wielding attacker and leads with his left side. The nunchaku is held in a ready position over the right shoulder. The defender leaves a fairly large distance between himself and the attacker (always a good idea when up against someone with a knife.

The defender then throws a low (about knee-high) front kick with the rear leg (his right leg). This serves three purposes:

The feint-kick is not meant to connect with the attacker’s leg; it is meant to divert attention downward. (Glancing down at the attacker’s knee just before throwing the kick can help draw his attention downward.) The kick should look forceful enough to put the attacker on the defensive, but it is not necessary to make contact. This allows the defender to maintain a safer distance because the striking range of nunchaku is considerably greater than that of a kick or a knife.

The real strike is a full-swinging nunchaku forehand to the attacker’s head. The strike should begin when the feint-kick has reached full extension. Don’t lose the momentary advantage over your attacker by taking time to plant your foot after the kick and then begin your strike. It will be too late. Strike while you are retracting your kicking foot. The pivoting motion of your swing and your own forward momentum will bring you to the final position.

After the nunchaku strike, the defender is balanced and mobile, ready to skip back from the attacker, if needed. The nunchaku is in excellent position for an immediate follow-up backhand strike if the attacker has not been neutralized.

The samurai (or bushi) were the warriors of premodern Japan. They later made up the ruling military class that eventually became the highest ranking social caste of the Edo Period (1603-1867). Samurai employed a range of weapons such as bows and arrows, spears and guns, but their main weapon and symbol was the sword.

Samurai were supposed to lead their lives according to the ethic code of bushido ("the way of the warrior"). Strongly Confucian in nature, bushido stressed concepts such as loyalty to one's master, self discipline and respectful, ethical behavior. Many samurai were also drawn to the teachings and practices of Zen Buddhism.